What the Tarot says about Baba Ramdev 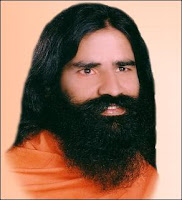 Baba Ramdev is a yoga guru who practises and teaches yoga and breathing asanas. Recently he has come into controversy for blaming the Congress Government for corruption and having black money. He attempted a fast, a satyagraha like Mahatma Gandhi but was attacked by the Government.

Using the Robin Wood tarot deck, I did a spread called the "Heart of the Matter" which provides us plenty of food for thought. I thought of doing this spread to analyze Baba Ramdev and what he really wants, his true intentions, obstacles and his influences.


Current Influences:
The Empress, Queen of Pentacles, 8 of Wands, Queen of Wands

Obstacles:
2 of Cups, The Heirophant

How others see you:
King of Pentacles, The Hanged man, The Chariot

Heart of the Matter:
Death

The cards are very interesting as out of the 13 cards laid out, 5 cards belong to the Major Arcana showing that Baba Ramdev and this controversy is a very important phase in India and will bring about alot of changes.
Among the cards of current influences, it is very interesting to see that there are 3 very influential women- one is the Empress (could be Sonia Gandhi) as she is the whole and soul of the Congress, the other two queens - the Queen of Pentacles and Queen of Wands, are two major women politicians who are influencing this whole situation.One of them has a lot of money and influential power and the other can convince the audience with her magnetic personality. Another major influence depicted by the 8 of Wands is the media which has the ability to put situations in any favour.

What does Baba Ramdev wish for? What does he want and what are his intentions?
The cards show that he is a simple man and he believes in bringing happiness to the society. His intentions are very noble. He believes in God and he has deep intuitive powers. He knows that he is right and will emerge victorious. Ace of swords shows that no matter what obstacles will come, he will be able to come out of it a winner. He wants to get to the truth of everything, destroy corruption and all evil. He is waiting and watching and very soon will do something dramatic which will reveal the truth to everyone.

What are the obstacles that he is facing? The Hierophant shows a religious man with high principles with one negative quality, his orthodoxy and old-fashion thinking. Ramdev too suffers from this. While his intentions may be noble, his thinking is backward and he must move with the times as well and have a global and more balanced outlook of the world. Some of his ideas are revolutionary, but some of them are too old fashioned.
Another obstacle is his friendship with someone who might not have his best interests in mind.

There are mixed views about Ramdev. Some people feel that he is a very rich millionaire who is very powerful and influential and is running the whole drama on his own like the King of Pentacles. Others (mostly his followers) look at him as a saint and a very calm, enlightened soul who knows the truth. Many others are confused whether he is a simple yoga teacher or having his own agenda. They don't know if he is black or white.

The Heart of the Matter Card is Death. Death is an important card of transformation. There will be major change in Indian politics and the way people look at Ramdev and the Congress from now onwards. This is not a minor issue and will always be remembered years from now. Change is always good. He will bring about change in the thinking of people and will guide the people to the right path. He is the figure in the hooded robe who will show us the way. He holds a black flag (of protest) with a white rose on it. The white rose in the card, shows the path of ahimsa, non-violence, peace and freedom. The transformation will be a very peaceful one where no one will get hurt. It is the end of an era, and the beginning of a new one. 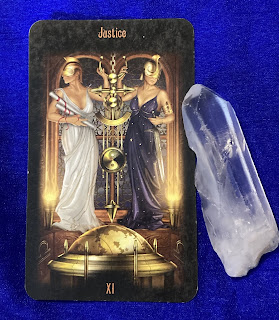