Deck of the Week - Sun and Moon Tarot

This week I will start a new feature on my blog called Deck of the Week where I will discuss different decks that have caught my fancy. Today I came across this wonderful deck called the Sun and Moon Tarot. 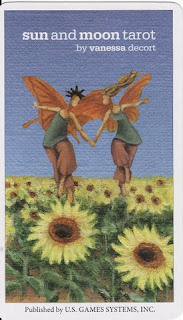 I have always been intimidated by the Thoth deck. While I have that deck with my since 2006, I have tried to understand it, but whenever I open the cards, I get a crazy mind-numbing head ache. I don't know what it is! Is it the energy of the cards? Is it it's busy geometric shapes? Or the influence of the Master of the Dark Arts, Aleister Crowley? I haven't been ale to figure that out. So far, I have stuck to the Rider Waite deck and it's numerous clones along with other angel, oracle and fairy themed decks which I connect with. So, I keep my distance from this deck, and anything Thoth related, knowing that some day I'll be able to face that deck. Till then, I need to prepare myself. I thought the first step would be to slowly introduce myself to the concepts of the Thoth through a non-intimidating, playful deck. That's when I met the Sun and Moon Tarot by Vanessa Decort. What I love about this deck is the images and the seemingly cute, almost oracle-like keywords on each card.Though it does have strong words used in the Thoth deck such as 'Debauch', the images are very happy and playful. Another key feature of this deck is that the figures have no faces. They have no eyes, expressions and features, which means that every time you look at the card, you can see something different.

Some of my favorite cards: 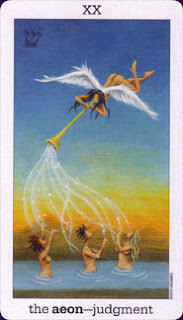 The card shows an angel giving messages to women in the water, almost mermaids through her musical trumpet. 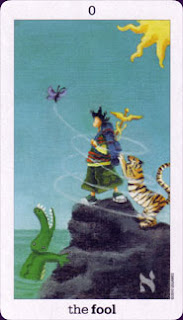 The card shows the Fool going over the abyss, where there is a crocodile waiting for him with his mouth wide open! Now that is a different take on The Fool! 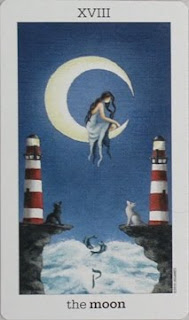 The card shows a lonely maiden sitting perched on the moon. How I connect with this card! The world doesn't understand her and she contemplates by herself, the choices she has to make.

All in all I think, one must give this deck a try, specially if they are intimidated by the Thoth deck, as this deck  retains the philosophies of it, but doesn't water down the content and the meaning of that deck.
at October 05, 2012

Email ThisBlogThis!Share to TwitterShare to FacebookShare to Pinterest
Labels: deck of the week, sun and moon tarot, tarot, vanessa decort 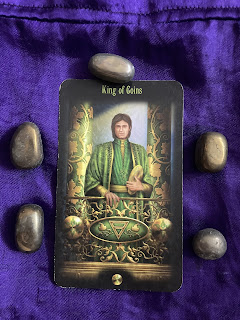