The World
Legacy of the Divine Tarot 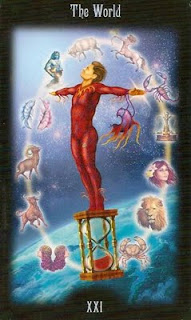 The World card is generally considered to be the best card in the pack. It symbolizes completion of all tasks and success in all endeavors. It is the completion of a cycle, and a successful end to an important phase of life. You have succeeded in one of life's tests and are now being rewarded.You can congratulate yourself for following the right path and deserve the success you are receiving now. This particular card in this deck instead of showing an androgynous person dancing between four separate forces, shows a man successfully standing on a timer, which shows that all the sand has passed through one side (completion) and the twelve zodiac signs revolving around him. He has mastered all the tests and now has wisdom. He has now removed his mask which is in hand and has nothing to hide. He is confident of his talents and abilities as he has experienced all the possible ups and downs of life. Now nothing can harm him.
at August 01, 2011