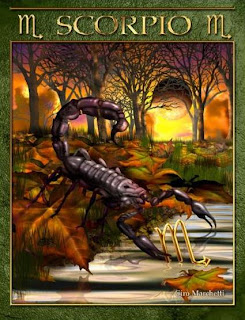 A scorpion is a nocturnal arachnid that attacks and paralyzes its prey with a poison injected by the long, curved tail, used for defense and destruction with a fatal sting. The Scorpio sunsign is ruled by the planet Pluto. One of their unique features are the Scorpion eyes which pierce with hypnotic intensity. Most people feel nervous and ill at ease under their steady gaze. Their eyes penetrate into your very soul. Their voice is velvety soft, husky or sharply cutting, but they speak slowly in staccato.

The Scorpio has total ego. He knows what he is and what he is not, and nothing else will change this knowledge. Insults will roll off his back and compliments don't move him an inch. He needs no one to tell him his vice or virtues. Scorpions are rarely nervous, their natures may be modified by other influences in their charts, but very slightly. They have sharp features and seem well drawn, and a beak-shaped nose. Usually their complexion is very pale and they have heavily knitted eyebrows. They appear to be cold and frosty, but this is only to conceal the boiling inner nature. No matter how their emotions are stirred, you will rarely see them reflected on the Scorpio's frozen, immobile face. They can proudly and consciously display a blank expression. You will rarely see them blushing or flushing, frowning or grinning. Their smiles are rare but genuine.

There is a particular type of Scorpio who moves and speaks quickly, and appears to have an open, friendly manner. He's really just playing a game with all this happy talk, inside he's just as determined and the more typical Pluto people. Be on guard with all Scorpions, they're not wicked, they're just not soft or naive. They don't beat around the bush if you ask them something. It'll either be a 'Yes' or a 'No', not a 'maybe'. They find it beneath their dignity to give false praise and flattery. When he says something nice to you, treasure it. You can be sure it's sincere and honest. If he says, you have a good voice, stop singing in the shower and grab a microphone. They give wise advice and are very generous. They naturally attract loyal and dedicated admirers or envious and spiteful enemies.

There is a haunting sweetness about them, and often a gentle sympathy for the sick. More United States presidents have been born under this sign than any other. Even in India, the first Prime Minister Jawaharlal Nehru and the first woman Prime Minister, Indira Gandhi were Scorpions. Scorpios come under three categories: The Scorpion, The Eagle and the Grey Lizard. He can be like the nocturnal scorpion, who will sting others and even sting himself to death just for the pleasure of it. He can be like the eagle, glorious and soaring rising above his earthly limitations and be just and wise. Or he can be like the grey lizard, which is between the scorpion and the eagle, who become victims of their own neurotic concern of their self. Instead of stinging the opponent, like the scorpion or rising above the bitterness, like the eagles, they bitterly withdraw in tangled hatreds hoping fate will punish their enemies and unconsciously draw destruction upon themselves. But, it is never too late for a lizard to transform into an eagle. He possesses a deep kind of magic which all Scorpions possess, they just have to call upon it.

He is fiercely possessive of what he believes is his, including success, but his ambition is never obvious. He quietly waits for the chance to move ahead, knowing he is qualified for the position above him. He takes control, slowly but surely. Scorpio can do just about anything he wants to do. Pluto is the planet of the mind and body, and most of the world's best surgeons are Scorpions. He was born knowing the secrets of life and death. The ancient mysteries fascinate his brilliant mind. He can be a politician, a television star or a bartender, but he'll manage to top all his competitors. And he'll do it so effortlessly, that it will seem like an act of fate rather than his own powerful will.

Scorpio is intensely loyal to friends. They can give up their life for a cause. Scorpio never forgets a gift or a kindness, and it's richly rewarded. But, he also remembers an injury or an injustice. Scorpio can destroy his body with excesses, melancholy or hard work. But he has very strong power that can make him recover from any illness. A long rest and a change of attitude are the best cures. The main areas prone to sickness and accidents are the reproductive organs, nose, throat, heart, spine, legs and ankles. They should avoid fire, explosives and radiation. Scorpio is deeply interested in religion, and curious about life and death and passionately drawn towards sex. He is also heroic, and dedicated to his family and love, and protective of children and weaker souls. He can be a saint or a sinner.

One of the strangest patterns in astrology is the death of a relative in the family within a year before or after the birth of a Scorpio. And when a Scorpio dies, there will be a birth in the family within the year or the year after. It happens at least ninety-five percent of the time. Pluto's symbol is the phoenix, rising from its own ashes, and Scorpio personifies the resurrection from the grave. The Scorpio flowers are the thistle and the honeysuckle. His gemstone is the bloodstone and lucky number is 9.