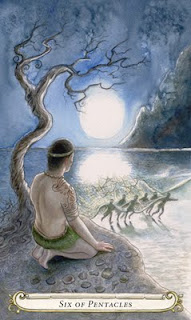 Today's Card of the Day from the Fairy tale Tarot is the 6 of Pentacles depicted by the Maori story of Kahukura and the Fairy Fisherman. Its the story of a young man named Kahukura who had a vision about a place and wanted to see it in his waking life. He was very curious about fairies and had heard many stories about them. One night, he saw fairies near the sea, pulling fish in their net. Seeing them, he joined them, mimicking their methods and hiding his true identity of being human. Dawn approached, and his true identity was revealed. They were shocked and dropped their fish and nets. Kahukura picked up the net, marveling at the ingenious weave that made catching so many fishes possible. Using this as a prototype, he made more of them, and used the gift of the fairies to benefit his people.

This card shows the moon, which has mysterious powers. It is a sign of good things to come. We never know, when we might receive unexpected help. Inner peace and prosperity is coming into your life. You will receive help from an unexpected source. We must learn to receive, if we only have been giving. There must be a balance between the two. You will succeed in whatever tasks you do and will become generous, spreading your positive energy to others.
at August 25, 2011