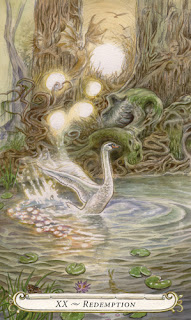 Today's card of the day from the Fairy tale tarot is from a beautiful story, one of my favorites - the ultimate story of the underdog, The Ugly Duckling. Since I was a child, I loved this story specially because it is so real. We all feel that we are ignored, bullied or treated differently just because we are not 'like everybody else'. Being different makes you special, makes you one of a kind. This realization enlightens us and helps us to follow our heart. This card traditionally called Judgement, the Number 20 card of the Tarot, is here called Redemption symbolizing transformation and liberation.

The story begins with a mother duck hatching her eggs. From the beginning, one egg itself looked different, paler than the rest. When the eggs hatched, instead of a yellow chick, a grayish creature came out. Other fowl laughed saying "That is the ugliest duck I have ever laid my eyes on." He was the oddball among his siblings and one day decided to run away. Months passed, the weather became cold. A kind man seeing the numb ducking picked it up a took care of it. His children were excited to have a new pet. But the frightened bird panicked and escaped into the brutal cold. Then summer came, the duckling felt the urge to spread its wings. His tiny wings had now grown! Then he felt his wings flap him away from the ground and carry him to the top of the trees. He landed in a pond occupied by the most beautiful birds he had ever seen. The royal birds looked at the newest arrival and swam up to him. The ugly duckling bowed his head and saw his own reflection - He was a beautiful swan! He was home at last. The children by the banks pointed out at him and said, "That is the most beautiful swan in the pond!"

This card means that we have survived the trials and tribulations along our journey. We are now liberated from the many tethers that held us back from becoming fully aware, integrated and whole. Our spirits are ready to experience higher consciousness, wisdom and greater awareness. What makes us truly beautiful is our inward journey. People only see our outward appearances and judge us for that, only we know about the inner struggles and the inward growth we have achieved on our life.
at August 29, 2011