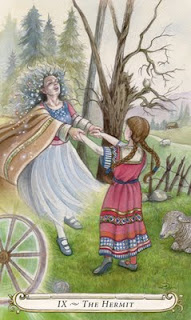 Today's Card of the Day from the Fairy Tale Tarot is The Hermit depicted by the Czechoslovakian story of The Wood Fairy.The story is about a poor but spirited girl named Betushka who lived with her mother and two sheep. She would spin flax under the tree while they grazed.  One day when she was going to graze the sheep, a beautiful lady appeared and asked her, ''Will you dance with me?'' Betushka danced with her till the wee hours of the morning forgetting about her sheep and her spinning. She was worried about what her mother would say. The next day, the same thing happened. But, this time the magical lady spun the flax for her in seconds. The next day, while they were dancing, the lady told her  that there was a surprise for her in the basket. When she went home, she told her mother about the incident. Her mother told her that she had been visited by a wood fairy. "They bless hard-working girls with gifts," she said. She looked into her basket and there was a pile of coins, enough to buy a big farm and house.

You have the combination of hard work and supernatural forces at work. Hard work is always blessed by the divine. From time to time, we need to retreat to a place where we can reflect on our journeys. In order to grow, we sometimes need to pause and view ourselves with more objectivity. We need to remind ourselves that we need not be so strict on ourselves.