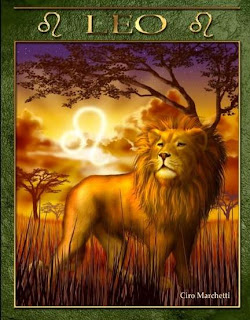 The Leo person doesn't like anyone to do him favors, He displays his arrogant pride and sunny playfulness at the same time. Leo, the lion, rules over all animals. So, it is natural that Leo, the person will rule over all humans. Sometimes he purrs, and sometimes he roars, scaring you half to death. The lion alternates between being energetic and lazy. There are two types of pussycats, the glamorous ones roaming around the hot spots of town and the coy ones will be sitting luxuriously at home. Anyways, Leos hate dark and boring places. There are no introverted Leos, there are only Leos who pretend to be introverts. Don't be fooled. Even the gentle Leos rule their friends and family inwardly. If you take away a Leo's pride, show him no respect and attack him, you will see him roaring.

Leos resemble a lion or a lioness. They have a thick mane of hair usually, with a lazy look in their eyes. Leos walk straight and proud with the smooth glide of a cat. The lioness is always ready to pounce if she feels threatened. They will always protest their young with all their life.They have a commanding air and look down on the other mere mortals. You cannot ignore a Leo in a group for too long. He'll either get centre stage with dramatic statements or will pout and sulk in the corner unless someone asks whats wrong. They generally have brown eyes and dark hair usually wavy in a wild, careless style.

Leos have a knack for telling people in a superior manner how you should manage your life. Their love for teaching makes them good teachers, politicians and psychiatrists. They are good at rationalizing but cannot manage their own affairs. His ego mixed with his honesty makes him lovable. If he's ever deeply wounded, simply flatter him, he'll become docile and will bask in the compliments. Leos are great organizers and a master of speech. They are excellent hosts or hostesses and make you feel like you are in a palace. You will always be surrounded with good food, music and fine wines. There are not many bachelors or spinsters in this Sunsign as they very easily attract love towards themselves. When he's just had a break up, he is lost. His pride shatters many marriages and love affairs. But, since he is forgiving, there are many reconciliations. Romance is very important in their life, and when it dies, the Sun doesn't shine for them.

They never lean on others, but prefer to be leaned upon. They like being responsible towards the weak and helpless. He complains of his burdens, but offer a helping hand and he'll refuse. He prefers to avoid receiving financial help, but loves helping others in need. A typical lion is extravagant at heart and dress expensively and always look well-turned out. He wants first class and luxury and spends freely on fun and pleasure.

Leos often get high fevers and are prone to accidents, sudden illnesses and chronic diseases. Leos either have a weak heart or superbly strong hearts. They may suffer from pains in the back and shoulders, sore throats or reproductive problems. They usually get up too soon when they're sick resulting in a relapse. Leos are either extremely neat or dreadfully sloppy - there's no middle road for them. They enjoy gossip and feel hurt when they're not included in conversations. They accumulate so they can distribute to others. They prefer important jobs, leaving the menial work to others. When a real emergency strikes, Leo will help the defenseless and protect the frightened. Leo is a fiercely loyal friend, but a powerful enemy. We should overlook his arrogance, vanity and laziness because his heart is made of gold. He should wear gold more often as it is his metal. His flower are poppies and lucky numbers are 1 and 4. He should wear the topaz gemstone for luck.