Let me start off with the Bollywood Tarot cards. For those who missed my earlier blog on what this whole thing is about... I  am fusing my two loves : Bollywood and tarot and attempting to make a tarot deck, and looking for common archetypes between the two. I start with a description of the movie from which the card is inspired and the reason why it is chosen for the particular card. 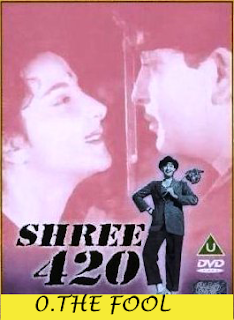 The first card of the Tarot is the Fool. When I got into Tarot, the first thing that came into my mind when I saw the Fool card, was the song 'Mera joota hai japani'. It is a classic song from the movie Shree 420 by the late Raj Kapoor. The main reason why it reminded me of it, was because the movie and the song in particular were about an innocent fool's journey and the beginning of adventures. The movie shows Raj Kapoor, a simpleton who sings that his shoes are from Japan, his pants are from England, his hat is from Russia but he is an Indian at heart. Spoken just like the Fool who has travelled the world, but he knows his truth and his essence. Also, he carries with him a knapsack, which is just like the one the Fool carries in the Tarot. 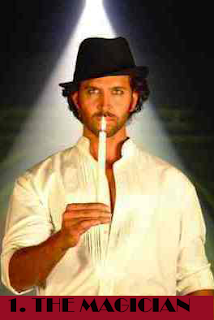 What better way to assign the Magician card than to a movie based on the life of an extraordinary magician? Guzaarish is an outstanding movie based on the true story of Ethan Masceranhes played by Hrithik Roshan, who was a magician who conjured up wonderful tricks, but because of an accident he becomes bound to the bed and the wheelchair. He wants to die, but mercy killing is illegal. The movie is about his battle towards death, or towards his ultimate freedom from his confinement. Even as a cripple, he is still a magician, teaching his craft to a young student who carries on his legacy. The movie has wonderful performances by Hrithik and Aishwariya Rai. The magician can do anything. He is a magic man who can make anything possible. He has tricks up his sleeve, and like the card in the Tarot, Ethan is mischievous and doesn't like playing by the rules. He is different from the rest of them, and a cut above all the competition. 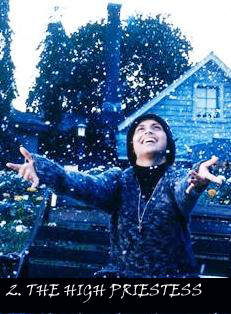 Like Guzaarish, this movie too is directed by Sanjay Leela Bhansali. Black is the story of a young girl (based on the life of Hellen Kellar) who is blind, deaf and dumb. She changes her life with the help of her teacher played by Amitabh Bachchan. Rani Mukherjee essays the role of Michelle McNally with elan and her character shines through all the obstacles she faces in her life. The High priestess is an intuitive and spiritual soul. Michelle has a very powerful sixth sense in the film, specially in the scene where she 'knows' that its going to snow when it is logically impossible. Only the High Priestess knows things which others don't and can feel the Earth from within its core, because that is where they live, in the soul, in the unconscious. Her inner self is so powerful, that it doesn't matter if they cannot hear the music, she can feel the vibrations and imagine the instruments playing and the people dancing. She can make magic out of even ordinary things. 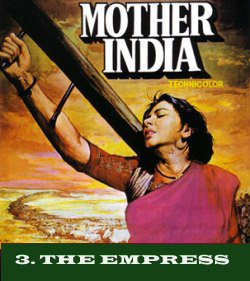 No other film can represent the true Indian mother than Mother India. This film is an epic tale of a poverty stricken mother who has to look after her children. She is the mother of the soil. She ploughs the fields and fertiles the land, just like the Empress card in the Tarot. She is surrounded in a field of fertility and has worked hard, spinning her yarn for the future generations. In the film, Radha, played by Nargis, raises her sons through many trials and tribulations. But no matter what happens, she sticks to her moral code. In the end of the movie, her son becomes a daaku (bandit) who tries to rape a girl. She takes a gun and shoots her own son. She is the Mother of India, the mother of the future generations. 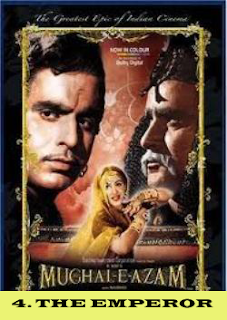 The reason I chose both these films is because the Emperor in these films is the same, Emperor Akbar. Mughal-e-azam is the  lovestory of Salim and courtesan Anarkali. Salim's father, Akbar did not want them to get married because of political reasons but he wasn't an unjust king, and in the end he spared the life of Anarkali. In Jodhaa Akbar, the Emperor is also shown to marry a Hindu even though it was not acceptable in those times. He allowed his wife to visit the temple and carry out her wishes. He was a very fair and just king. He would always do the right thing, even if it was war or giving his riches to the poor. He was one of the greatest kings of our country just like the Emperor card, who is very reliable and just.

I will continue with this section of the blog with the next cards 5-9 : The Hierophant, The Lovers, The Chariot, Strength and The Hermit.
at December 19, 2011

Card of the day: Queen of Feathers

Card of the day: Queen of Feathers Keywords are *Perception* and *Truth* The animal teaching us a lesson today is the Bat. The bat has sha... 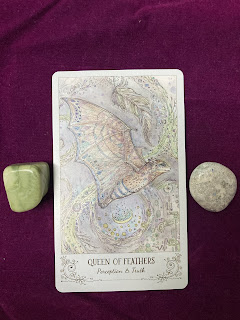