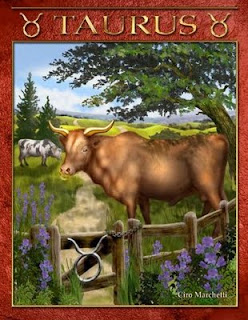 The Taurean will be found in a bank, in a real-estate office, or anywhere else. He could belong to any profession, but he'll always be the strong, silent type. Until you get to know him better, all he'll say to you will be words like yup, no, thanks, so long or uh-huh. The typical Taurean will speak very sparingly. Like the Rock of Gibralter, he is solid and steady and nothing disturbs his tranquility. Once his mind is set, he will not budge an inch. The bull simply wants to be left alone. Don't disturb him and he'll remain contented. Don't tease him too much, unless you want to experience his violent rage! When he goes mad, he can destroy everything in his path. He exhibits perfect poise and control unless someone pushes him to the wall. Then he'll charge and go crazy. This behaviour is usually unexpected and could happen very rarely, sometimes even once or twice in his life.

May people actually resemble a bull. They have an elusive quality about them. The female Taureans have serene yet steady eyes. She moves gracefully, with hidden strength. Their ears are small and they chew very slowly, and have excellent digestion. They usually have dark skin and eyes. Males will have thick necks and broad and strong chests and shoulders.

Taurus is strongly attracted to the opposite sex but pursuing women doesn't interest him. He prefers to attract people to him. Taureans never make efforts to call their lovers or friends. But if you call him, he'll always be there. They seldom worry about anything but they can pout and brood if things don't go according to them.
He makes slow decisions, his character is strong and actions are predictable. He'd rather stay home than go out and get dressed. He doesn't rush into closing deals quickly. They love to sit at home under his own roof and stretch out comfortably on a sofa. He needs peace of mind and loves fishing and gardening.

The average bull is super healthy. He falls sick rarely, but he recuperates very slowly. He distrusts optimism, which doesn't promote speedy recovery. The sensitive areas are the throat, neck, ankles, back and spinal area. The Taurean love for food can put a strain to the heart. If the bull eats or drinks in  excess, he loses his physique. One of the main causes of his illnesses is the lack of country air and exercise. He needs it, though he can stubbornly deny it. There is no use telling a Taurean than he's stubborn. He will not agree.

Taureans howl with laughter if someone falls on a banana peel. Their laugh is warm and earthy. Taureans are usually pretty well-off financially. He starts with a solid foundation and builds a stable business and bank account. He likes to accumulate money and power to satisfy his urge for security. Money always comes to Taurus, sooner or later. But he's not stingy; he has a generous heart and helps friends out financially.

He is impressed by bigness: a big house, a big car, even big animals in a zoo. Taureans have love for art and music and many have beautiful voices themselves. They are attracted to the colours of nature: the blue of the sky, the pink of the rose, the green of the leaves...He can double his money wearing a sapphire and the metal copper. The bull's fixed nature makes him reach where he wants slowly and steadily. Eventually success will come to him and when it does, it will be for a lifetime.