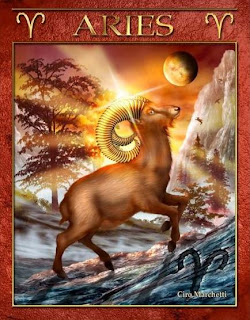 When you first meet an Aries person, the first thing you will notice is that they are unusually friendly having a contagious smile. These people are not shy about their opinions and are very idealistic. They will talk back to anybody, be it a cop or a gangster in the heat of the moment, usually regretted later on. They are ruled by the planet Mars and possess its fiery energy. Since it is the first sign of the zodiac, it represents birth. The ram is only conscious of himself, just like a baby. Like a baby, he will want things to be according to him, he will call you at 4 am if required. But can you call a small innocent baby selfish? He has the cutest smiles and is unaware that he is causing any inconvenience.

There is not a trace of cunning in the Arien and he stays lie this for his entire lifetime believing in his heart. They are bad liars and they can spin fabulous dreams. There is nothing hidden or complicated about him. Arien people have sharp features, well-marked eyebrows often joined. They might have a mole or scar on the face and a reddish cast to the hair in the sunlight. They have broad shoulders and walk with a bend, always in a hurry.

The Mars-ruled person will look at you straight in the eye. You will never see him openly weeping. If he ever cries in front of you, be sure that he is cut to his very soul. He will be at the head of his profession, whatever that may be. He is direct, impatient and critical but very generous. Frankness and honesty are Arien trademarks. Some of them lack stability and are child-like for the rest of their lives. At some point in life, the Arien will suffer injury to his head or face.No one can accuse him of laziness - he is the most active and energetic person in the room. He honestly believes that he can do anything better than anyone else. One thing he hates, it's being ignored. They have a bad temper, but they don't mean what they say and forget fights and arguments in seconds.

The typical ram can be friends with beggars and kings and is very graceful socially. They are incapable of accepting defeat. They are born fighters and will fight till the very end. They do not make good politicians, they are too innocent and honest for that. They are happy in business or creative fields where they can do their own thing. He trusts everybody and is shocked if someone betrays him. If you accuse him of dishonestly, he will be amazed. Aries has an innocent facet to his nature and an eternal joy and naive faith. Like their birthstone, the diamond, Ariens are hard to crack. His metal is iron and its unbendable strength gives him many chances to win battles. The fire in his spirit is a torch of idealism. He is the true leader who is pure without greed or jealousy. Help yourself to his clothes, money or time. He always has time for you.