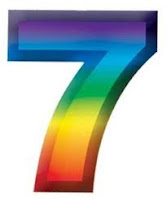 The number 7 vibrates to the planet Neptune. It represents spirituality, sensitivity, sympathy and mystery. 7 is the number of illusion and delusion, sometimes deception but also number of healing and miracles, faith and dreams that come true.

A person is influenced by the Number 7 vibration if born on the 7th, 16th or 25th of any month. 7 people tend to have remarkable dreams. Sometimes they talk about them, and sometimes they keep them to themselves. But they dream more than most. Secretly, they have an interest in esoteric mysteries, mythology, spacecraft or U.F.O.s and the unknown. They often possess the gifts of intuition and clairvoyance and a certain calming magnetism which has a great influence on others. Often, their mere presence has a soothing effect on a troubled person. The 7 vibration is associated with peculiar ideas about religion, a dislike of following the beaten path, and a tendency to adopt political beliefs which are unique and non-orthodox. It is not unusual for a 7 person to discover, found or believe in a new religious concept.

The 7 person will travel extensively at some time in the life or else read avidly books about foreign people and faraway lands. Most people influenced by the 7 vibration are attracted to the sea and at some time associated with sailing, water sports or the Navy. There is a tendency to be anxious about the future which is why they need to know there is a rock of financial security somewhere in the background. Yet, they care little about material possessions or accumulating great wealth. 7 people can earn large sums of money through their original ideas. When they gravitate towards the arts, they make fine dancers, singers, poets, writers, actors or actresses. They are quiet and laid back, having ambitions they don't discuss with others. They are sympathetic to the pain of others which is why friends and relatives unburden their troubles to the 7 person. They prefer to keep their own problems to themselves. They shrink from prying questions and dislike invasion of their privacy. Refined manners, artistic temperament and a sensitive nature make up the 7 essence. You will be surprised if you knew all the strange thoughts that swim through their minds when they're communing with themselves. The 7 person must find you trustworthy before he shares these inner streams of contemplation and you'll have to earn that trust by proving you're not judgemental or prejudiced. 7 people are rarely either.

COLOURS that harmonize with the Number 7 vibration are sea green, light yellow, aqua, pink and white. 7 people should avoid wearing black or dark colours even when they are indicated by the Sunsign.

GEMSTONES which are beneficial are amethysts and emeralds. Water lilies and lotus blossoms will lift their spirits when the heart is sad, lonely or longing.

HEALTH PROBLEMS that they face are related to anxiety. They are easily affected by worry, annoyance and frustration than others. When they become worried about circumstances around them, they're inclined to imagine that things are worse than they are, and fall into melancholy, which results in physical fatigue. They soak up negative situations and attitudes like a sponge. It is very important for the 7 person to take regular baths with warm water and sea salt to remove the negativity which gets attached to them as they are more prone to it than any other number.

When they feel that they're genuinely needed and appreciated, 7 people will cheerfully take up any responsibility. It is difficult for them to realize that they're not as strong physically as they are mentally. Often, the body is frail and the 7 person attempts too much for his or her own strength, a major cause of all their health problems. They have extremely delicate skin, sensitive to the sun with peculiarity regarding perspiration. Eating things that disagree with the digestive system frequently results in boils, rashes and pimples. January, February, July and August are months when they may fall sick.

FOODS that should be consumed are lettuce, cabbage, cucumbers, mushrooms, apples, cranberries, and juices of all fruits.

HERBS that are beneficial are chicory, linseed, ceps and sorrel.


Number 16
The number 16 is called the "Shattered Citadel" pictured by the ancient Chaldeans as "a Tower struck by lightning from which a man is falling with a crown on his head." It warns of a strange fatality, danger of accidents and the defeat of one's plans. At least once in their life, the 16 person will receive tremendous shock from an incident which will change them drastically. If the number 16 is the birth number, then one should change it to avoid this vibration. To avoid disappointment, the number 16 person must make all plans in advance, making certain that any possibility of failure is anticipated. They also have the number 7 intuition so they must listen to the voice within if they feel that anything will go wrong. The inner voice must not be ignored. A famous number 16 was Abraham Lincoln who had dreams about his assassination but never paid heed to them. Renouncing fame and leadership will reduce the negativity of the number 16.


Number 25
25 bestows spiritual wisdom gained through careful observation of people and things, and worldly success by learning through experience. Its strength comes from overcoming disappointments in the early life and possessing the rare quality of learning from past mistakes. This is an excellent number, but it is not a material number, so financial benefits must be gained through other numbers.