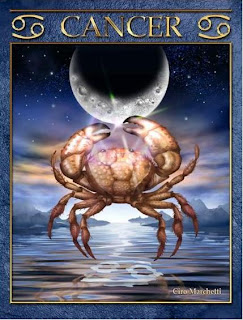 Cancerians are very moody people. They love the moon and love to dream and imagine under the moonlight. The Cancerian's passing moods are like the different phases of the moon- sometimes they can be bright like a full moon, or sometimes dull with a faint shimmer. Yet, the moon actually never changes, we just think that it does because it appears to. The Cancerian too is the same person- he is dependable and constant.

You can recognize him with his 'crazy lunar laugh' which is very contagious. When he's in a good mood, he can be the life of the party. He loves jokes and laughs loudly at every single one of them. He is never shallow or superficial. They secretly enjoy attention and soak up all the praises they get. On the other hand, when Cancer is in a depressed or sad mood, beware of him. He could drown you in depression with his pessimism. He has many deep rooted fears and insecurities which often bogs him down. He is vulnerable and when he cries, his tears are real coming from his vulnerable heart. Since they are very sensitive, even a hard word or a rude glance could wound him.When the crab is hurt, he disappears into silence. He dislikes revenge and prefers to recoil in his protective shell. Once you've wounded him, he could ignore you for days and days. He won't answer phone calls, doorbells or his mail. Cancer people seek solitude and retreat just like real crabs. That's when they become crabby.

He is not angry with you, he is disappointed with life. He'll get over it and be his sweet self when the phase of the moon changes. There are two basic Cancer types: a round face, circular eyes with a baby-face look (like Katrina Kaif) like a full moon, or a fairly large skull, overhanging brow and high cheekbones, good teeth (like Priyanka Chopra) like a crab. Cancerians have great bone structure, and their arms and legs are longer than the body. They have broad shoulders and very expressive features. Cancerians have great memories and never forget any of the lessons life has taught them. A Cancerian is usually very patriotic and is impressed by historical figures. He loves collecting antiques, treasures and ancient relics, and have a curiosity about the past.
People confide their secrets to the crab, because they are great at keeping secrets. They are compassionate and highly intuitive. He knows what you're thinking of, but you will rarely know his thoughts. The typical Cancerian doesn't like to discuss his private life, but he's delighted to hear about yours. Cancer seldom judges, he just gathers, absorbs and reflects. Cancer can never give up something that they really want, even a pair of torn slippers. Like a crab, he always appears to be walking sideways or in the opposite direction. The Cancerian heart is too soft to not be touched by anyone in need. He truly cares and wants to help. Cancer likes rescuing strugglers, and has a soft heart hidden inside his hard shell. He wisely distributes his time, money and wealth to everyone, but he does it in his mind, before impulsively doing it.

Male or female, Cancerians love their home, no matter where it is or how it is. His home is where he plays, lives, loves, dreams and feels safe. Though he may travel over half the world with his career, a Cancer person is never really happy if he doesn't come home. No matter how much money he saves, he never feels secure, he needs more. His emotions never let him relax completely. He's always thinking about an imaginary future disaster for which he'll have no money. He hoards and stocks up on clothes, shoes, scarves, and many other things which he could need in the future. He needs to feel safe and secure. Cancerians love water. If they're not swimming, then they're surfing or water-skiing. Some crabs have boats and yachts, as the moon and the tides keep calling them. They believe that if something is old, it has value, if its new, then its a suspect.
Cancerian emotions can be stronger than the physical body. Worry can make him sick and cheerfulness can cure him. He fears financial loss or the loss of someone he needs emotionally. If his security his threatened (bank or heart), he falls into depression which causes sickness. If he grows melancholy about fearful possibilities, he invites real trouble and will take twice as long to recover.

The most vulnerable areas are the kidneys, knees, bladder and skin. They live up to a ripe old age. They cling to life and have the will to live. Cancerians have powerful imagination, so they must visualize positive things happening in their life, and they will manifest with ease. Cancer people love nurturing and caring, specially plants and gardens. They are rarely broke, and love to save for the future. He is an expert at accumulating cash and making it grow like trees and flowers he plants. Whether he eats it or not, a Cancerian's cupboard will never be bare. Just talking about food, brings a glow to his face, and stories of starving children horrify him. They care deeply about the poor and the hungry. He dislikes people who waste food and are strict about cleaning up the plate. They have a great maternal instinct. They love feeding food, cuddling you up in blankets or protecting their near and dear ones.

Cancerians should wear the shiny colours of the moon, pale green, pale gold, mauve and lavender.  His flower is the lily and the white rose. He should wear pearl, moonstone and emerald.