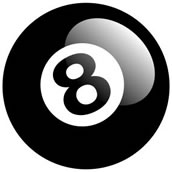 The number 8 vibrates to the planet Saturn. It represents wisdom, learning through experience, stability, patience and responsibility. 8 is also the number of financial security, caution, restriction, self-discipline and self-control.A person is influenced by the Number 8 vibration if born on the 8th, 17th or 26th of any month.

8 people are normally quiet, shy and reserved. They don't obviously push ahead, but slowly and surely they will get where they want to go, and nothing will stop them from achieving their ambitions. They shyness and reticence is a cover for an intense drive to reach the top of their profession or career. They make excellent teachers or counselors and most of them could be successful in the tough game of politics. They excel at anything that requires patience and intelligent deduction. Those influenced by the 8 vibration may have had poor health in childhood, but they grow more robust when they reach maturity. These people are willing to wait for their plans to bear fruit and they use the waiting time wisely. Its rare to find an 8 person procrastinating or ''goofing off.'' They have an inborn sense of duty and responsibility that won't allow them to take a careless attitude towards what is expected of them. Most of those born under the 8 influence are as reliable as a grandfather clock, and are as cozy to be around as a grandma quilt or comforter. They have a rich sense of humor, but one has to watch out for it, it's subtle and never obvious. These people behave as if they don't care a peanut about what people think of them, and they appear to be turned off by compliments, yet inwardly they care very much what people think of them.To be considered weak is the very last thing they want to happen.

Most 8 people have deep and intense natures and often play an important role in life's drama and many times are the instrument of Fate for others. There's a tendency toward fanaticism in religion, and they'll stick by what they believe relentlessly, in the face of all opposition. They make loving friends, but bitter enemies. Although they appear to be cold and undemonstrative with those they love and trust, they can be shyly affectionate and warmly devoted. They're often lonely, needing desperately to be loved, and they're capable of great sacrifices for an ideal, an ambition or for those who depend on them. They grow younger in appearance and behavior as they grow older. They look and act younger at fifty than they did when they were twenty. They're as demanding of themselves as they are of others, but for all the outward attitudes of wisdom and maturity, self-control and discipline, the 8 person's heart is lonely and they need to learn that the pursuit of happiness is not a sin.

COLOURS they should wear are indigo, brown, dark green and navy blue.

GEMSTONES which are beneficial are diamond and onyx.

HEALTH PROBLEMS: They suffer from troubles with the liver, bile, intestines and excretory part of the system. They have a tendency to develop migraine  headaches, diseases of the blood, rheumatism and auto-poisoning. They're advised to avoid meat of all kinds, since they're allergic to animal food.

FOODS which should be consumed are carrots, broccoli, spinach and celery.

HERBS which are beneficial are sage, wintergreen, mandrake root, Solomon's seal and wintergreen.

Number 17
People born on the 17th of any month have Number 17 as their Compound number. This is a highly spiritual number and was called the "Star of the Magi" or the 8 pointed star by the ancient Chaldeans. This is the number of Love and Peace and promises that the person it represents will rise superior in spirit to the trials and tribulations of earlier life, with the ability to conquer failure in personal relationships and career. 17 is the "number of Immortality" and indicates that the person's name will live after him. This is an extremely fortunate Compound number.

Number 26
This number is unique and has a lot of power. It is based on compassion and unselfishness, the ability to help others, but not always the Self. 26 is full of contradictions. It warns of failures, disappointments and failures specially regarding the ambitions, brought about through bad advice and association with others, and unhappy partnerships. If 26 is the name number it should be changed, but if it is the birth number then the person must never pursue partnerships and must pursue the career alone. They must not heed advice of others, even if they are well-intentioned. They must only follow their personal hunches and intuition. They must not behave in an extravagant manner or invest money by listening to other people. Be generous with others, but also build a solid foundation for yourself.