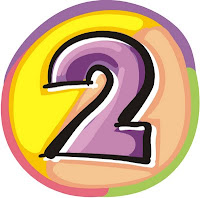 The Number 2 vibrates to the Moon. It represents imagination, parenthood and sensitivity. 2 is the number of childbirth, conception and dreams. A person or entity is influenced by the Number 2 if born on the 2nd, 11th, 20th or 29th of any month.

2 people are dreamers, with a tendency to fear the unknown or the unfamiliar. They are extremely imaginative and inventive, but not always as forceful in carrying out their plans and ideas. These people possess a romantic nature, and are secretly 'psychic'. The intuition is highly developed. A 2 person fears every conceivable loss: loss of love, property, money, friends, employment. They love to travel the globe as frequently as finances permit but they must have a home to return to. They are devoted to their parents, especially the Mother. They make ideal parents but they must be careful not to smother their children with possessive love. All 2 people are ultra concerned with the well-being of friends and relatives. They hover over everyone, making sure they don't catch cold, throw money away foolishly, etc. 2 people are extremely cautious, and dislike gambling or taking chances. They like money, but like to accumulate it in a safe, stable way, invest it securely so it can increase through dividends and interest. They are quite secretive, and never let others know what the next move might be. They are experts at removing secrets from others but they won't allow you to invade their privacy. They always have money and are also charitable. When 2 people learn to overcome fear, possessiveness and unnecessary caution, their imagination, adaptability and intuition can carry them to the fulfillment of their many dreams.

COLOURS: Light green, pale yellow, silver, violet and lavender. Try using these colours in your wardrobe, in your surroundings or in your car.

GEMSTONES: Emeralds, moonstones and pearls are favorable for Number 2 people.

HEALTH PROBLEMS: The number 2 vibration brings a tendency to suffer from stomach problems and digestive disorders. They should be careful of the food they eat and the water they drink. Gastric troubles and internal growths are possibilities. The breast and chest areas are vulnerable to problems. They suffer from anxiety; once they let go of this, they will be able to recover faster. January, February and July of every year are the months when sickness or accident will strike the Number 2 people, so they should be careful during those times.

HERBS which are favorable are chicory, moonwort, linseed, ash of willow, endive, rapeseed.

Number 11
People born on the 11th of any month have Compound number 11 as their birth number. This number is called A Lion Muzzled-A Clenched Fist. This is the number of hidden trials and treachery from others. It represents two forces or two members of the opposite sex which must conquer a third force. They must identify the obstacles in their life and must eliminate the separating force.

Number 20
People born on the 20th of any month have 20 as their Compound number. The ancient Chaldeans called this number 'The Judgement' or 'The Awakening'. Like in the Tarot, the Judgement card is represented with a winged angel sounding a trumpet while a man, woman and child are rising from the tomb in prayer. At some time in their life, there is an awakening which brings new purpose, new plans and new ambitions. There may be delays and obstacles in their plans but these can be conquered by developing patience. 20 brings very vivid dreams, plus the ability to manifest the happy ones and cancel the negative ones. It is not a material number if one is looking for money, then they could change their name number to a material number. But, to the 20 person money is not important, and they will be happy even if their basic necessities are fulfilled.

Number 29
People born on the 29th of any month have 29 as their Compound number. Number 29 is a number of perhaps the heaviest Karma of all. It tests the person for spiritual strength through trials and tribulations. Their life is filled with uncertainties, treachery and deception from others, unreliable friends, unexpected dangers and considerable grief and anxiety caused by members of the opposite sex. It is a number of grave warnings in every area of personal life and career. If 29 is the compound number of the name, its obvious that the name MUST be changed to lift this difficult vibration into a powerful number like 10 or 19. A miraculous medicine will be to have absolute faith in goodness and the power of the Self, in the energy of optimism.